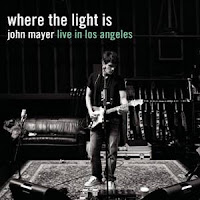 Since John Mayer came on the scene as the pre-coital soundtrack to the sorority and fraternity life in 2001, he’s progressed from purely bubblegum radio pop to thick bluesy mojo to bluesy mojo radio pop. A not-so-subtle transition for some who have claimed him as their ‘wonderland’ or have wanted to lay beside him in bed whilst “Daughters” plays in the background and he ‘completes’ them. The issue with being a serious artist after having found a niche in the hearts of the collegiate femine is that it’s hard to be taken seriously when what you’re really passionate about as a musician begins to move you into a new musical direction. But he seems to have suffered no fan loss for his movement towards the bluesy side of things, which is some thing to be grateful for when we’re on the verge of losing one of the greatest expressions of music on earth.Hints of Mayer’s love of the blues seeps through in live albums like Any Given Thursday released back in 2003. While not overtly heavy in the blues arena his inclinations and leanings musically towards this genre come through in his live improvisational arrangements of his more popular and less radioed tunes, like “Neon”.Mayer’s growth as a producer, arranger and songwriter was evident in 2006’s Continuum. The highly Motown and R & B influenced tracks are a foot-tapping accomaniment to his romantic and deeply personal lyrics with the occasional politcal footnote (listen to the head-bobbing, yet slightly passive “Waiting on the World to Change”. But where Mayer has always shined as a musician, performer, songwriter, guitarist and arranger is in his live performances.

With 3 previous live endeavors under his belt, two of which boast two discs each, Mayer has proven that the library of music he has to pull from, both as an artist and from the public domain, has thrust him into the category of “Consument Performer”. Highly entertaining both in banter and it artistry, Mayer’s live shows are what they should be, entertaining. I haven’t yet been able to experience a live show, but I enjoy listening almost as much as if I were there and he personalizes each song to the point of being able to ‘see’ what he means musically without having to be there. Where the Light Is: Live in Los Angeles is no exception.
Thoughtful and reminiscent of his more poppy days the first half of the first disc has a VH1 ‘Storytellers’ vibe to it, without any storytelling. Not overly flashy in the playing deptarment it’s a nice introduction to the evening that progresses both sonically and in the number of musicians involved. I do however find the cover of Petty’s “Free Fallin'” to be a little contrived and it feels like he was practicing it before he went on stage and decided to throw it in for the hell of it.
The second half of Disc 1 is the “John Mayer Trio” made up of Berklee College buddies’ of Mayer, Pino Palladino and Steve Jordan. Jordan also helped with the production of Continuum. Mayer’s Trio released a live album back in ’05 and while a vast majority of that album made it onto this live performance some tracks lack the conviction and tightness that Try! conveyed. Live in LA boasts some tasteful forays into the Band of Gypsys camp of 69/70 Hendrix. Particularly at the end of “Who Did You Think I Was” when they rip into “Power of Love”. The ‘Trio’ portion of the album is energetic with some musical risks that, whether planned or not, take away from the prescence that the band has and the sound that they have the ability to produce. Purchase Try! if you’d like to hear them at their sonic best. Take particular note of “Vultures”, “Out of My Mind”, “Come When I Call”, and Hendrix’s epic ballad “Bold as Love” on Live in LA.

Disc 2 really shows off Mayer’s prowess as a guitarist. With a full R & B band + more vocalists and another guitarist, Mayer is free to explore musical regions of the map that the previous two sets limit. Of particular note are the solo sections on two of his more prominent ballads “Slow Dancing in a Burning Room” and the epically beautiful “Gravity”, reworked with a more blues saavy ending than on the Trio’s Try! album. It is really exquisite. This sort of electric ballad was touched on in 03’s Heavier Things with the track “Come Back to Bed”.

Tonally the second disc lends itself to Mayer’s understanding of the guitar as an amplified instrument moreso than the previous Trio set. Use of octave pedals, delay and univbe/leslie cab simulators add a depth to the music that is enhanced by the sound of a full band. Musically this set is a lot tighter as well. A good example of this is “I Don’t Need No Doctor” where after the double-time solo section there’s a nifty unison guitar hook that both Mayer and the rhythm guitarist, with Mayer occupying the higher octave.

John Mayer has brought a revival to the Blues, regardless of what your personal opinions of him are, and that alone has won me over as a fan and a musician. Thanks are due him, oh ye faithful.

It's currently 81 degrees at the Bora Bora airport.

There was a bottle of Lagavulin 16 at the liquor store. I didn't buy it. But someday...I will.